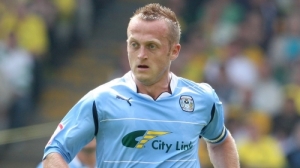 Reports have been circling for the past week that the West Yorkshire club were planning to swoop for City’s Northern Irish international, who only has one year left on his contract at the Ricoh Arena.

Thorn however is continuing to reject such reports.

“There’s nothing in it at all.”

“It’s not happening. I spoke to the chairman again yesterday and I have spoken to Sammy and he’s more than happy here. He said he’s not interested in moving.”

“Things like this can be unsettling but that’s not the case with Sammy. He’s got his head down and he couldn’t be more positive about being here and what we are trying to do.”

“He wants to stay and be successful with us.”

The club have confirmed no offer has been received for Clingan, but with City’s current financial problems, should be a bid be received, it’s hard to tell whether owners SISU would actually reject the bid.