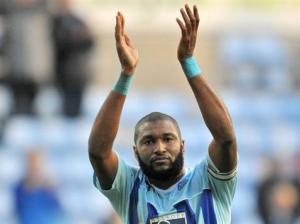 Coventry City manager Tony Mowbray has confirmed he is dealing with the agent of captain Réda Johnson personally in a bid to keep the defender with The Sky Blues amid interest from Championship clubs.

Former boss Steven Pressley bought Johnson to the club on a free transfer from Sheffield Wednesday last summer on a one-year contract which includes the option of a further year in the player’s favour.

The 27-year old captain made 20 appearances last season due to injury, but only three of those 20 games ended in defeat; showing what an influential figure he is in the Sky Blues’ defence.

“Without saying it’s a done deal or anything like that, I’m hopeful,” Mowbray told the Coventry Telegraph.

“I would say it’s ongoing. I have spoken to Réda’s agent half a dozen times over the last few weeks, even on my holidays. I get on well with him and have known him a lot of years. I’m hopeful with that but he’s also potentially got other offers coming his way.

“There’s still a lot of talking to be done and as I have told Reda and his agent I would like to keep him at the football club and have a real positive push to get out of this division.”