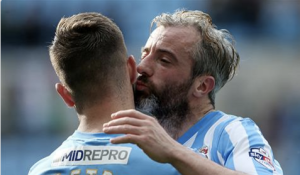 Hunt, 34, joined the Club in January on a free transfer, and went on to make 5 appearances for The Sky Blues before his short-term contract expired.

His spell at The Ricoh Arena was mainly limited to playing left-full back to cover injuries and he has revealed to The Irish Independent that the final home game of the season against Sheffield United was supposed to be his final game.

“In fairness, I finished playing the last few games left wing-back, a position that suited me. The second last game of the season [Coventry 3-1 Sheffield United] was supposed to be my last game. I asked the manager [Tony Mowbray] could he consider picking me and he said I was playing anyway, so I brought my family along, knowing it would be my last game. That was quite emotional for them. For me, it wasn’t, because I just wanted to play well. So it didn’t really touch me then. But, the week after, the manager said to me, ‘oh, you played well last week, we’re playing Oldham’. Now, in fairness, I didn’t really fancy finishing my career at Oldham, but it was another game, and the set of lads I played with, I enjoyed their company, so I said ‘OK, no problem’.

“I literally went to the pitch for a walk around by myself, and, with music playing, I got a little bit emotional then. I was thinking, ‘OK, this is actually going to be the last time I step on an English football pitch.’ That was hard, I have to say, partly because I was by myself. When I started off, I came over by myself, and when I finished, I was by myself, at this game, away from everybody that knew anything.”

Hunt’s spell at Coventry will probably be remembered more for the radical change in hairstyle when he shaved his long, brown, curly locks off and went with a grey, short back and sides than for what the former Premier League star achieved on the pitch.

Read the full article on The Irish Independant here