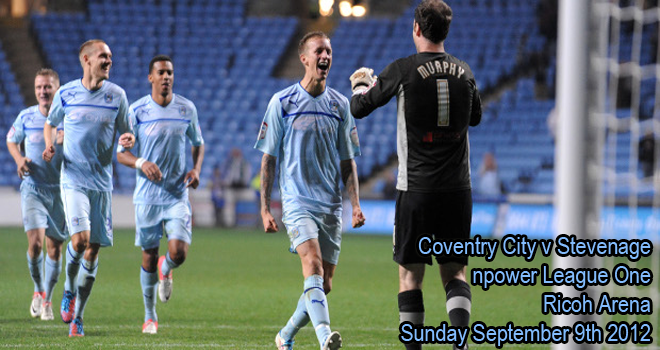 Coventry City welcome Stevenage to The Ricoh on Sunday, still looking for their first league victory of the season. City fell to a 1-0 defeat away at Crewe last time out in the league, bringing an end to their undefeated start to the 2012/2013 campaign, before following it up with a 10-9 penalties victory over League Two side Burton Albion on Tuesday night to progress to the Second Round of the Johnstone’s Paint Trophy.

Stevenage have been one of most progressive clubs in Football League in recent seasons and will be looking to continue that development this year.

Graham Westley, current Preston North End boss, took the club from the Conference to League One and it is up to Gary Smith to continue his work, after Westley left for PNE last season.

David McGoldrick is likely to make his first league start for Coventry when they entertain Stevenage.

The striker arrived on loan from Nottingham Forest on transfer deadline day and came off the bench against Crewe last weekend before being promoted to the starting XI for Tuesday’s JPT victory over Burton.

Cyrus Christie, Richard Wood and Gary McSheffrey were handed starts against Burton and it remains to be seen whether Shaw will stick with them or recall Jordan Clarke, William Edjenguele or Adam Barton, provided Barton is released early from international duty with Ireland Under 21s as they can no longer qualify for the UEFA Championship finals.

Stevenage boss Gary Smith has no fresh injury worries ahead of their first league meeting with the Sky Blues.

David Phillips: The right-back signed for the Sky Blues from Manchester City in 1986 and played a crucial role in the side which won the 1987 FA Cup. The versatile defender was brought in by John Sillett and George Curtis and went on to make 100 appearances for Coventry, scoring eight goals. Fondly remembered by City fans, he spent three years at the club before moving on to Norwich City in 1989. He continued his successful career at clubs Nottingham Forest, Huddersfield Town and Lincoln City before ending his career at Stevenage Borough, making 19 appearances for the club.

Craig Reid: The Coventry City Academy youth product never made an appearance for his home town club before being released in 2006. Reid went in search of first-team football at Cheltenham Town and Grays Athletic before finally settling at Newport County in 2008. His form at the Welsh club, 58 goals in 96 appearances, earned him a move to Stevenage in January 2011. He went on to make 49 appearances at the club, scoring nine goals before moving to Aldershot Town to be reunited with his former Newport County manager Dean Holdsworth.

Last time we met:
This is the first meeting between Coventry City & Stevenage