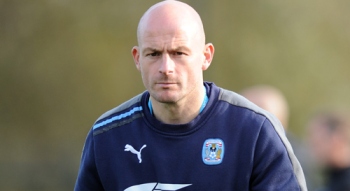 Coventry City development coach Lee Carsley has today left the Sky Blues to join up with fellow League One side Sheffield United as their new assistant manager.

At Brammall Lane, Carsley will now join up with former Everton teammate David Weir, who was recently appointed as Danny Wilson’s successor at The Blades.

Carsley’s departure brings a long-running relationship with the Sky Blues to an end following two spells as a player before beginning his coaching career with the club’s Under 18s set-up.

The former Republic of Ireland international first arrived at City in 2000 where he spent two seasons before a move to Everton saw him link up with Weir.

Carsley returned to Coventry for the 2010/11 season under Aidy Boothroyd after a spell at Birmingham City, before hanging up his boots where he made the transition to coaching with City’s academy the following season.

The 39-year-old enjoyed a fairly swift rise through the club’s coaching rankings where, after a season with the Under 18s, he was brought up to take charge of City’s newly formed Under 21s setup for the start of the 2012/13 campaign which also saw him heavily involved with first team sessions.

Carsley also undertook a brief spell as the Sky Blues’ caretaker boss in February 2012 following the departure of Mark Robins and the installment of current manager Steven Pressley.

The move to Bramall Lane marks the latest progression for Carsley’s coaching career.

City boss Pressley said: “Lee has been a highly valued and tremendously popular figure amongst both the club’s players and staff and I have certainly enjoyed working with him since I arrived here.

“I do though fully appreciate that this opportunity is one he could not turn down and I wish him nothing but the best of luck and offer my heartfelt congratulations on his new role.”

Carsley has admitted the decision to leave the Sky Blues was not easy, but felt the opportunity to take up a role as assistant manager was not one he could turn down.

“I’m grateful to people like Gregor Rioch who gave me the opportunity to start my coaching career with Coventry’s Under 18s because that experience has been invaluable to me,” he said.

“I wasn’t looking to leave the club but when the chance came to take an assistant manager’s role it was an opportunity I felt I couldn’t turn down.

“David Weir is somebody that I’ve known and respected for a number of years so the decision to leave Coventry was not an easy one but the opportunity was one I really felt I could not pass up.”

“I’ve had some great times with Coventry City, the fans have always supported me and I felt they really got behind me and the lads when I was caretaker manager for a short while and I felt the squad became tighter as a result of that.

“I want to thank the fans for the way they got behind me and the team and it was just a shame we could not get that one more goal in the JPT area final at Crewe.

“But I leave with great memories, I’ll always be checking on the club’s progress because it means a lot to me and I still feel that Coventry is headed in the right direction under the manager, something I look forward to keeping an eye on as the season goes on.”

Part-time blogger. Full-time entertainer. Can be found on RNTomlinson.com & ccfctv.co.uk.
View all posts by RNTomlinson »
« “SISU OUT” banner at Glastonbury.
Baker: “More determined than ever to have a successful season for the club.” »