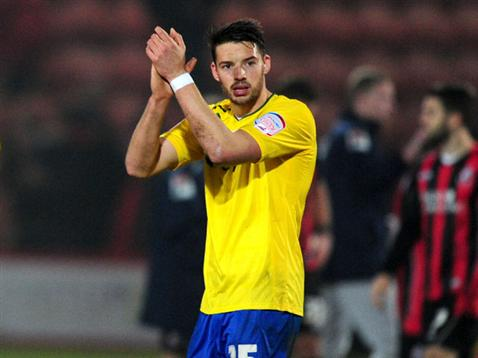 Aaron Martin made 12 appearances on loan for Coventry City from Premier League side Southampton in 2012/2013.

Aaron Martin has been identified by Coventry City manager Steven Pressley as his top transfer target once the club are removed from their current transfer embargo.

Central defender Martin, spent the end of the 2012/2013 season on loan at The Ricoh Arena from Southampton, where he made 12 appearances following on from an earlier loan spell at Championship side Crystal Palace.

Coventry City currently find themselves with only one recognised central defender in their senior squad – Jordan Willis, after the departure of Richard Wood following the expiration of his contract due to budget restrictions, and French pair William Edjenguele and Kevin Malaga being told by Pressley that they don’t figure in his plans for the future.

Due to the current embargo – which was placed on the club for entering administration in March, Pressley has already missed out on one of his other transfer targets as out-of-contract Burton Albion winger Jacques Maghoma joined Sheffield Wednesday on a free transfer, but Pressley hopes Martin will still opt to join the Sky Blues following his successful loan period with the club last season.

Martin is well down the pecking order at St Mary’s and Saints boss Mauricio Pochettino is thought to be open to letting him move on.

The 23-year-old joined Southampton from non-league Eastleigh in 2009 and he has made 22 appearances for the first-team, ironically scoring his first goal for the club in a 2-1 victory over the Sky Blues in a 2-1 FA Cup victory for The Saints.

Keep up-to-date with all the transfer rumours in our dedicated 2013/2014 Transfer Centre.

Part-time blogger. Full-time entertainer. Can be found on RNTomlinson.com & ccfctv.co.uk.
View all posts by RNTomlinson »
« The Dons Trust “worried about the future” of Coventry City.
VIDEO: Sky Blue Trust protest this Saturday. »