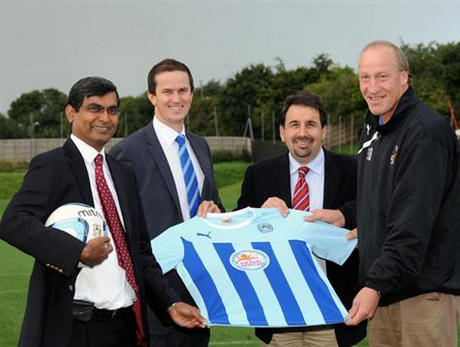 Coventry charity The Grace Research Fund will feature on Coventry City’s new home shirts for the next three months.

At the start of the season the club revealed the new shirt, minus a sponsor, revealing it would not be used until at least the end of September.

It was established by Coventry parents Tracy and Simon Hayes, whose daughter Grace was born 14 weeks early at Walsgrave Hospital, weighing 1lb. She lived for just nine months.

The research is conducted at University Hospital in Coventry, Warwick Hospital and Nuneaton’s George Eliot Hospital, as well as the two local universities.

This moves sees the first time a charity has featured on the club’s shirts in the sponsor’s area.

Tynan Scope, corporate sales manager for Coventry City FC, said: “The Grace Research Fund is a local charity benefiting local people – specifically, premature babies and their parents. The charity has raised over £100,000 since it was established and we hope this will give it a further boost in profile for the great work it does.”

Dr Andy Coe, consultant paediatrician at University Hospital, said: “This is the first time we have had our name on a football kit and having the shirt sponsorship will help to raise our profile throughout the region and beyond. We are very grateful to all involved for this opportunity.”

The shirts will be worn for the first time next month, probably against Sheffield United in a televised game on Sunday, October 13th. This has now been confirmed by the club as the first time the kit will be used.

One thought on “Grace Research Fund to feature on Coventry City shirts.”