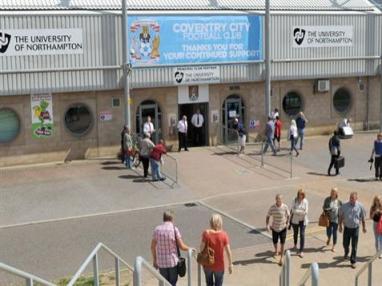 Northampton Town Football Club have this afternoon released a statement regarding ACL’s withdrawal of legal against the club for hosting Coventry City home matches.

ACL, jointly owned by Coventry City Council and The Higgs Trust, yesterday released a statement of their own which revealed that they would not be proceeding with legal action against the League Two club.

“We were surprised to read the latest press release from ACL’s PR consultants.  To our knowledge, ACL have not withdrawn their action though they are fully aware that we intend to ask the court to strike it out as an abuse of process.

“ACL launched their legal action against Northampton Town Football Club on 12 July. Their lawyers, Walker Morris, made a statement using patronising language about our club. They stated that they were quite certain NTFC had been complicit in committing a “bog standard” breach of contract law and would be liable for “substantial damages”. However, we defended ourselves robustly as it was clear from the very beginning that this action had no legal merit nor factual basis.

“ACL appear to have belatedly realised that there is no basis for this action and are looking for a face-saving way to withdraw it. Before apparently deciding to withdraw it unconditionally, Walker Morris tried to demand money from NTFC in return for pulling back.

“However, ACL’s aggressive and bullying tactics have meant that NTFC has had to incur substantial legal fees as well as waste of a good deal of management time.  If ACL really does want to withdraw its action, we expect to be fully compensated for these costs. We would also expect ACL to apologise to the club and its supporters for seeking to intimidate us in this way.”

Part-time blogger. Full-time entertainer. Can be found on RNTomlinson.com & ccfctv.co.uk.
View all posts by RNTomlinson »
« Gary Madine jailed.
Christie out of cup clash but Daniels available. »