Kris Boyd to arrive in the summer? 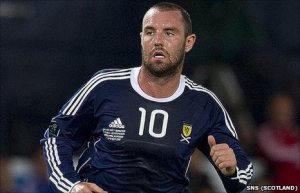 Reports are in abundance today that former Rangers & Middlesbrough striker Kris Boyd could join Coventry City in the summer.

Since the departure of top-scorer Leon Clarke to Wolves in January, City boss Steven Pressley has been working to bring in an experienced striker.

When speaking to The Coventry Telegraph yesterday, Pressley admitted he was finding it hard to bring in an experienced striker on loan, and now he may have to wait until the summer.

“We’re still trying to get a couple of strikers but just can’t get an experienced one,” he said.

“I have been trying but we cannot get one. The problem is the player we want may become available but might not.

“If he does then we’ll try to move on him but, in the short term, we’re going to try to get in another younger one, and I’m hoping we can do something this week.

“We’d like two, ideally, but we’ll have to wait on the more experienced one.”

Boyd, 30, now plays at Kilmarnock; the club that started his career and has, like Clarke, hit 18 goals so far this season.

The Scottish international returned to Kilmarnock after spells in Turkey and The United States.