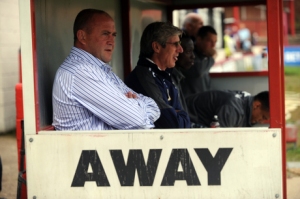 Thorn, who was sacked by the Sky Blues after just three games of the 2012/2013 Season, leaves Aggborough after just two months at the helm of the club.

“The club feels that by making a change now, the team will have a better opportunity to not only finish the current season strongly but, equally as importantly, will also be able to carry momentum forward into the start of a new season – whichever division that may be in.”

After joining the club on the 8th January, Thorn took charge of just eight league games; where he won two, drew two and lost four. Thorn also took charge of two FA Cup ties, where they defeated League One side Peterborough United 3-2 away from home before narrowly losing 1-0 to Premier League Sunderland in the Fourth Round.

Thorn leaves Harriers with the side 10th in the Skrill Premier, four points from the play off positions.