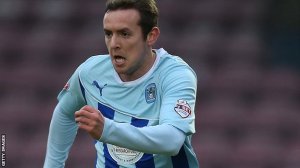 Defender Blair Adams has admitted he is “sad” to be leaving Coventry City but is looking forward to a new chapter with fellow League One side Notts County.

Adams, 22, originally joined the Sky Blues on loan from Premier League side Sunderland in 2012, before making the move permanent in January 2013.

In two seasons with the club, the left back made 64 appearances and became a fan’s favourite with bursts down the left-hand side.

Adams left the club via mutual consent earlier this morning and signed a two year deal with The Magpies this afternoon.

“There are no hard feelings. I loved it there and was sad to go,” Adams told BBC Radio Nottingham.

“I’ve just got to put it behind me and go again. I’m lucky that I’ve sorted something out quickly.

“There are always new challenges to take on and I’m delighted to be here.”

Meanwhile, Sky Blues’ boss Steven Pressley admitted it was a tough decision to tell the defender he could look for another club. “This was a very difficult decision for me to make,” he said.”Blair is a fantastic kid. His attitude and approach towards the game are first class.

“But I feel that some tactical adjustments will limit his first-team opportunities. It is only fair we give him the chance to seek regular football elsewhere.”