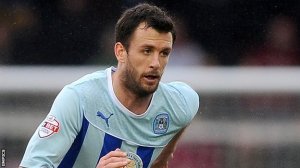 Coventry City defender Dan Seaborne has today left the club by mutual consent just one day before they kick off their 2014/2015 League One season.

Seaborne joined The Sky Blues permanently in January after a loan spell from Yeovil Town.

The centre back scored one goal in 24 appearances.