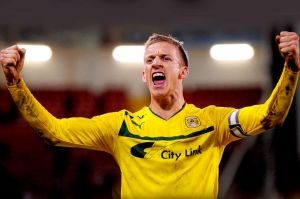 Former Coventry City captain Carl Baker has been strongly linked with a move to League Two side Portsmouth.

Baker, who left the Sky Blues as Transfer Deadline Day came to a close after agreeing to a mutual termination to the final year of his contract, is still to find a new club.

Being a free agent, Baker can sign for a side out of the transfer window and after a positive start to the League Two season, Portsmouth are hoping to land the goal-scoring midfielder.

Championship side Blackpool and League One sides Barnsley & MK Dons are also said to be looking at Baker, and at one point in the summer transfer window, Baker was said to be close to joining Danny Wilson at Barnsley before the move was called off.

Baker scored 10 goals for the Sky Blues last season as he captained the side to League One safety after starting the season with a ten-point penalty for entering administration and was City’s longest serving player before his departure.

In total Baker scored 28 goals in 182 appearances for City.