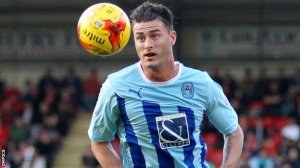 Former Coventry City trio Gary Madine, Mathieu Manset & Jon Stead will be on the look out for new clubs over the summer.

None of the trio will be offered fresh contracts with their respective clubs when they expire at the end of June.

Madine, who rejoined City for a second loan spell, scoring four goals, will be leaving Sheffield Wednesday after spending the second half of the season on loan at relegated Blackpool.

Former Sky Blues boss Steven Pressley was hoping to sign Maghoma from Burton Albion back in 2013 but was beaten to his signature by The Championship side.

Jon Stead will be leaving Huddersfield Town, and looks likely to be rejoing Bradford City, where he has enjoyed a successful loan spell, which included knocking Premier League Champions Chelsea & fellow Premier League side Sunderland out of The FA Cup.

Also looking for a new club will be Mathieu Manset following Cheltenham Town’s relegation from The Football League and former loan goalkeeper Colin Doyle who has been released by Birmingham City.

Meanwhile Chris Stokes has been released by Forest Green after they failed to advance in the Conference Play Offs, paving the way for the loan defender to complete a free transfer to The Sky Blues in the summer after spending the last two months of the season at The Ricoh Arena.