Mowbray back in for Ricketts. 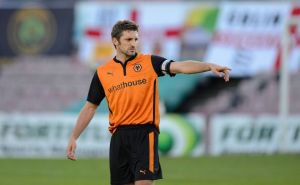 Coventry City manager Tony Mowbray has confirmed he has spoken again to former Wolves captain about a move to The Ricoh Arena.

Ricketts, 33, spoke to Mowbray at the end of last season about a potential loan move to The Sky Blues,  but he instead opted to help Swindon Town try and achieve promotion to The Championship.

Now a free agent after his contract at Wolves expired, Mowbray is again trying to lure the veteran defender to shore up the Sky Blues’ defence.

“I have had a conversation with Sam over the summer to see what his thoughts are and what he’s doing.

“I would see Sam Ricketts, if he comes in, first and foremost as a leader, a good human being and a lad who captained Wolves in 43 games in a team that romped away with the first division title two years ago.

“So he’s a guy with leadership qualities and a good pro who brings versatility as well, of course, and could play in a good few positions for us.

With the future of captain Réda Johnson still unclear after talks with Mowbray at Ryton today, Ricketts could be brought in as a direct replacement, or a central defensive partner to the Benin international.

Ricketts is an international himself, having won 52 caps to date with Wales, who are currently managed by former Sky Blues’ boss Chris Coleman but he also has a wealth of experience in The Premier League and Championship with Hull City and Bolton Wanderers.