Johnson likely to miss rest of the season. 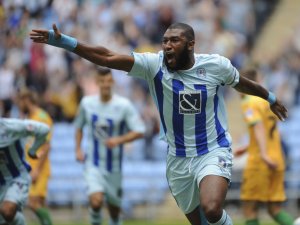 Inspirational defender Réda Johnson is liekly to miss the rest of the 2015/2016 Season, Coventry City have confirmed.

The Benin international, 27, was forced off in Saturday’s home game against Blackpool following a tackle in the 80th minute of the game.

Following scans on Monday and visits to numerous specialists earlier this week, the Club have now confirmed that the former captain is unlikely to play again this season.

Johnson has injured his hamstring tendon, and whilst initial fears were that the centre-back would be out from 4-6 weeks, Johnson will now be on the sidelines for the next 7 months.

Last season, Johnson was restricted to just 22 appearances due to injury, but he had featured in all 12 of City’s league games leading up to the injury this season.

In total, Johnson has made 34 appearances for the Sky Blues, since joining on a free transfer from Sheffield Wednesday last summer, scoring 8 goals.

UPDATE: When asked on Twitter whether the Club would be terminating the defender’s contract, which runs out at the end of the season, Coventry City confirmed that they would not be doing so.

No, we definitely will not be doing that. #CCFC stands by its players. #PUSB https://t.co/eHSsdsBrIu

« Cole: I’d like to stay for the season.
Charles-Cook sets new post-war record. »