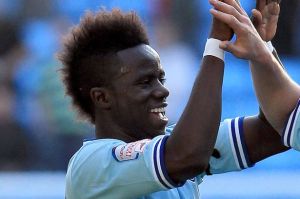 Bigirimana, 22, rejoins the Sky Blues on loan until January 3rd and joins fellow Magpie loanee Adam Armstrong at the Club.

The Burundi international, who joined the Club’s academy in 2004, went on to make 28 appearances in the Sky Blue shirt in 2011/2012, the season which saw the Club relegated to League One.

However, his impressive performances saw Premier League side Newcastle capture his signature and take him to St. James’ Park for an undisclosed fee.

Following a couple of frustrating seasons which haven’t weilded much first team football, Bigirimana now looks to put things right in his second spell at The Ricoh Arena.

“I’m so pleased to be back and to play for my home club,” Birigmana explained to the Club’s official website.

“I call it my home club because it is where I grew up and started my career. My home club contract wise is Newcastle but Coventry always has a special place in my heart.

“The club are doing great so it’s a great bonus for me to come while confidence is high. My target is to get games and add whatever the manager needs me to add into the team. We have to continue winning games and by the time January comes, I want us to still be 1st or 2nd – still in a good position. Then we’ll see my future from there.

“But one thing I want to put right is that the club was relegated when I was here, so it would be a dream come true part of a team that takes the club back where they belong.”

Following the impressive form of Adam Armstrong in the opening stages of the season which has seen the Newcastle loanee hit 12 goals in 14 appearances, Newcastle Head Coach Steve McClaren clearly believes Tony Mowbray can reignite the career of the Burundi international.

One thought on “Bigirimana returns “home””