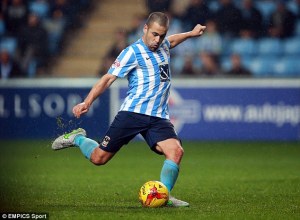 Midfielder Joe Cole has had his contract terminated by mutual consent ahead of his move to North American Soccer League side Tampa Bay Rowdies.

Cole, who initially joined The Sky Blues on a 35-day emergency loan at the end of October, before signing permanently on a contract until the end of the season, announced earlier this week that he would join The Rowdies this summer.

Now, ahead of the final game of the season at Oldham on Sunday, Cole and the Club have mutually terminated his contract to enable him to link up with his new Club immediately.

In his time with The Sky Blues, Cole made 22 appearances, registering 6 assists and 2 goals.

Following his departure, Cole wrote an open letter to the staff and supporters of Coventry City on the Club’s official website;

I wanted to take some time to thank everyone connected with Coventry City after my departure today.

Since joining the club in November, I’ve thoroughly enjoyed my experience with the Sky Blues and I feel as though my time at the club has helped me gain a new lease of life in my footballing career.

The supporters, players and staff have all taken me in with open arms from day one and that will always be in my heart. I’d like to start by thanking Tony Mowbray.

He has shown so much faith in me during my time with the club and gave me the time to get fit. Because of him, the correct training schedule and the medical staff at the club, I’ve been able to play more consistent match minutes this season because of the environment at the club.

Secondly, I’d like to thank the players. The dressing room environment at the club is really special and everyone contributes to a working environment which you’re always happy to come into work each day.

I’ll bring away some great memories from my time, especially the 6-0 win over Bury, and even though the season didn’t end the way we wanted to, I really believe the club can continue the progress it’s made this season and carry it on to next year.

Finally, I want to say thank you to the supporters. I’ve had a fantastic welcome from day one from all the supporters I’ve met and it’s been really humbling.

You look back through the record books and it’s incredible the club continues to have such loyal support despite the lack of success over the years. The away support, in particular, shows how big this club is and that it definitely shouldn’t be at this level.

You’ve got to remember the amount of progress which has been made this season and that is down to what the manager and his staff have put in place. I’m sure that success is just around the corner as the gaffer continues that progress, and when it comes, every single one of you will deserve it.

I’ve regained my love of football again and I’d like to thank Coventry City for doing that.