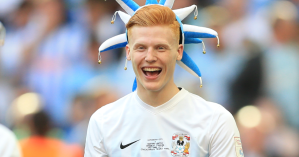 Haynes, 22, graduated from The Club’s academy and went on to make 107 appearances in 7 years at The Ricoh Arena.

The left back was a part of the squad which won The Checkatrade Trophy at Wembley in April 2017 and made 25 appearances last season as The Sky Blues won The League Two Play-Offs, but Haynes did not feature in these games.

“We received an offer from Shrewsbury Town and following the arrival of Junior Brown, we felt it was a good opportunity for Ryan.

“Ryan has been a good servant for Coventry City Football Club, playing over 100 games and is another product of the Academy.

“I would like to thank him for his time with us and I wish him all the best in his career.”