Could Nottingham Forest make a move for Carl Baker? 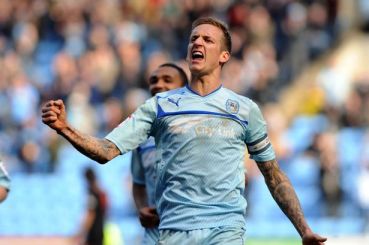 Rumours are starting to circulate on the internet that Championship side Nottingham Forest are to make a move to sign Coventry City captain, Carl Baker.

Baker, who signed for City from Stockport County when the Sky Blues were in the Championship themselves, excelled last season, despite all of the off-field troubles the club have faced, as Mark Robins named him club captain.

Baker made 55 appearances for the club last season, scoring 15 goals in all competitions, form which has apparently attracted the attention of Nottingham Forest.

Should Forest, or indeed any other club make a move for Baker or any other player, City may find it too difficult to turn down an offer which involves a fee, with the club still in administration.

In total since joining the club, Baker has made 117 appearances, finding the net 18 times. Baker has also clocked up 13 yellow cards, and two sending offs in his spell at The Ricoh Arena.

Part-time blogger. Full-time entertainer. Can be found on RNTomlinson.com & ccfctv.co.uk.
View all posts by RNTomlinson »
« Leon Clarke: Ready for pre-season.
Coventry City unseeded for Capital One Cup First Round draw. »

2 thoughts on “Could Nottingham Forest make a move for Carl Baker?”