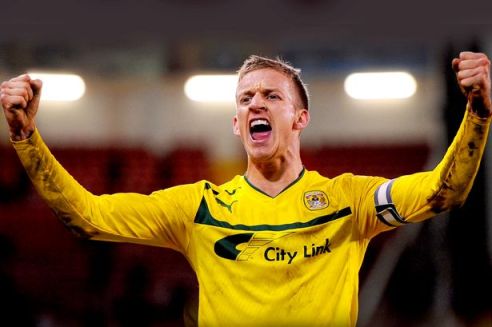 According to rumours on Twitter, Championship side Nottingham Forest have now made a bid for Coventry City captain Carl Baker.

Earlier in June, it was rumoured that Forest were preparing a move for City’s Player of the Season, and it now appears they have made that move.

The rumour started from a tweet from Transfers To Be, who claims to be a current Football League agent. The tweet reads as follows:

“Nottingham Forest have now made a bid for Coventry City’s Carl Baker, will bring you a fee when I can #nffc #skyblues”

Baker, who signed for City from Stockport County when the Sky Blues were in the Championship themselves, excelled last season, despite all of the off-field troubles the club have faced, as Mark Robins named him club captain.

Baker made 55 appearances for the club last season, scoring 15 goals in all competitions, form which has apparently attracted the attention of Nottingham Forest.

With the Sky Blues still in administration, despite joint-administrator Paul Appleton naming Otium Entertainment Group Limited as the preferential bidder for the club, City would find any transfer that involves a fee hard to turn down.

Manager Steven Pressley has dismissed the rumours and insisted he has not received any offers for any of his players.

“There’s absolutely nothing in that,” said Pressley of the multi-winning Player of the Year.

“I think that’s just people speculating. I have not received any offers for any of my players and Carl is a pivotal part of what I want to create here.

“He’s my captain who was a key player last year and who is a key player in my plans going forward so there is no intention at all to sell Carl.

“I’ll be honest with you, I’m excited about the new season. There are a number of issues and situations that need to be resolved but we need to keep focused on the positives in the football department, and there are many positives.

“It’s the dawn of a new season and hopefully a new period in the club’s history.”

In total since joining City, Baker has made 117 appearances, finding the net 18 times. Baker has also clocked up 13 yellow cards, and two sending offs in his spell at The Ricoh Arena.