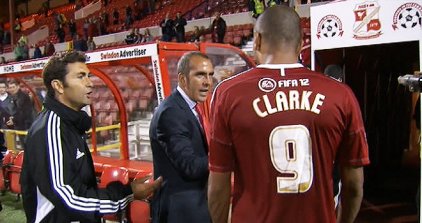 Paolo Di Canio and Leon Clarke have an infamous bust-up on the pitch following Swindon Town’s League Cup defeat to Southampton in 2011.

Fellow League One side Swindon Town are reportedly looking into the possibility of resigning striker Leon Clarke.

Clarke had a public bust-up with then manager Paolo Di Canio, now at Premier League Sunderland following a League Cup defeat to Southampton and after the bust up, Di Canio vowed he would never play Clarke again.

Clarke then found himself farmed out on loan to Chesterfield, Charlton & Crawley.

Now at Coventry, Clarke has gone on to score 10 goals in 18 appearances for the Sky Blues, however the financial situation at the club means they would find it hard to turn a suitable offer for the player who joined them on Boxing Day last year, down.

Following the departures of James Collins and Adam Rooney to Hibernian and Oldham respectively, Swindon are looking to bolster their front line as they challenge for promotion to The Championship.

Following the opening day defeat at Crawley, the national media reported that the Sky Blues had told Clarke as well as the two other highest earners at the club; captain Carl Baker and goalkeeper Joe Murphy that they could leave the club due to financial reasons.

Since, manager Steven Pressley, Murphy and Baker have all denied the claims, however Clarke has not spoken in public about the rumours.

Journeyman Clarke, who has played for 15 different clubs during his 10-year career, scored 21 goals in 31 games last season and finished joint-second top scorer in League One.