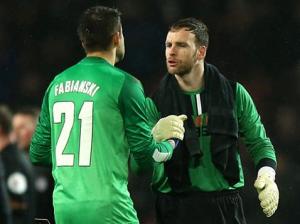 Coventry City manager Steven Pressley has this afternoon confirmed out-of-contract goalkeeper Joe Murphy has held discussions with other clubs about his future.

Pressley also confirmed that as of this moment, Murphy has not yet signed for another club and is still hopeful of persuading the Irish goalkeeper, who yesterday earnt a recall to the Republic of Ireland national team for their fixture against Italy on Saturday, to stay with The Sky Blues.

Speaking to the club’s official website, Pressley said, “I’m obviously aware that Joe has been in talks as he will soon be out of contract with us but to this point I understand that has been no contracts agreed or signed.

“Joe has been exceptional for this football club, both in terms of his form and level of appearances, and obviously I would like to see him stay here.

“By the same token, we are also aware that Championship football brings with it Championship wages and we would be unlikely to be able to compete with that.

“However, we still would like the opportunity to make a case for him to remain with us. I know he enjoys being here, he is highly respected and his performances have attracted a great deal of credit so ultimately it will come down to how Joe sees the next stage of his career.”

Since joining The Sky Blues in 2011 after Scunthorpe after they suffered relegation to League One, Murphy has been almost ever-present over three seasons and started all 53 first team games in 2013/2014.

He has been strongly and publicly linked with a move to Championship side Huddersfield Town managed by Mark Robins who managed Murphy at The Sky Blues from September 2012 to February 2013.

However, if Murphy were to move to The Terriers it would likely be as back up to Alex Smithies at first, who has strongly been linked with a move away from the club to The Premier League himself.

Murphy has in the past, and even before he signed for The Sky Blues, stated that he would only move somewhere where he would be playing week-in-week-out and would not move to sit on the substitute’s bench.