Madine sent (back) to Coventry. 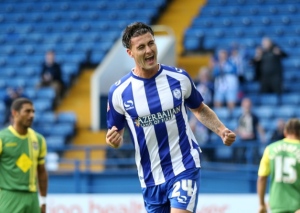 Coventry City have bolstered their attacking options after re-signing striker Gary Madine on loan from Championship side Sheffield Wednesday.

Madine, 24, rejoins the club after falling down the pecking order at Hillsbrough, becoming the second loan signing to re-join the club in 24 hours, after Aaron Martin made the switch from Yeovil Town yesterday.

Madine previously had a 9 game loan spell with the Sky Blues, under Chris Coleman in 2009.

In those 9 appearances, all from the substitutes bench, Madine failed to score but with Wednesday he found the net regularly in League One, helping the Owls win promotion back to The Championship.

“We’re delighted to bring in a player of Gary’s quality. He is a player we’ve been tracking for sometime and we’ve always been aware of the quality he has.

“We made enquiries about availability in the summer but remained very much in Sheffield Wednesday’s plans at the time.

“He is a player with a proven goal-scoring record at this level and certainly brings great presence and physicality to the team.”

Madine will wear the number 8 shirt and could make his second debut away at Leyton Orient on Saturday.

« Martin in, Clarke out.
Wilson called up for international duty. »