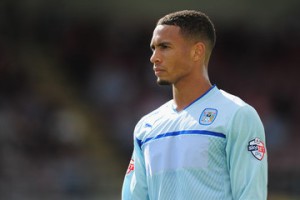 Coventry City defender Jordan Clarke has completed his move to fellow League One side Scunthorpe United for an undisclosed fee.

A product of the club’s academy, Clarke went on to make 144 appearances, of which 125 were in the league, scoring 4 goals.

Clarke recently returned from a loan spell with Yeovil Town on loan as part of the deal which saw Aaron Martin rejoin The Sky Blues in November, but has decided to join The Iron permanently.

Initially, Clarke was a member of Pressley’s infamous ‘Bomb Squad’ but won his back into Pressley’s plans at the start of the 2013/2014 season, before signing a new contract which was due to expire in June but once again found his playing time limited this season.

City boss Steven Pressley said: “Although Jordan has been at this football club for close to 15 years, I have fortunately worked with him for just a little short of two years. He is a product of the club’s Academy system and a player we should all be proud of.

“His attitude has been exemplary during my time here but after such an impressive season last term, his chances have been limited this campaign.

“I discussed this situation with Jordan and we both agreed after I could not guarantee regular first-team football that at his age and his stage of career, it would be best for him to seek a new opportunity.

“Again, on behalf of everyone at the football club, we would like to thank him for his efforts and contribution during his 15-year period at this club and wish him every success for the future.”