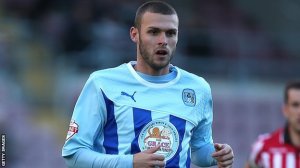 Coventry City striker Billy Daniels has this morning completed his permanent move to fellow League One side Notts County.

Daniels, 20, graduated through the Sky Blues’ academy and went on to make 30 appearances, scoring three goals.

Only four of those appearances came this season, and he was loaned to League Two side Cheltenham Town at the end of last season, where he made two appearances.

Speaking to the club’s official website, City manager Steven Pressley spoke about the decision to allow Daniels to move on,

“At this football club our players get opportunities at a really young age and get fast tracked into the first-team system.

“Obviously players will become frustrated if they have been given an opportunity in the first-team and then find chances hard to come by. That’s what has happened with Billy.

“On behalf of everyone at the football club, we would like to thank Billy for his efforts and contribution during his time at the club and wish him every success for the future.”