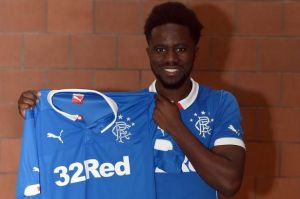 Former Coventry City midfielder Gaël Bigirimana has been ruled out for the rest of the 2014/2015 season due to a mystery illness.

Bigirimana, who left The Sky Blues in 2013, joined Scottish Championship side Rangers on loan from Newcastle on Deadline Day but has yet to make an appearance for the Ibrox side and now it looks increasingly unlikely he will play for Stuart McCall’s side, unless he rejoins them next season.

Bigirimana was one of five Newcastle players to cross the border along with Remie Streete, Shane Ferguson, Kevin Mababu & Haris Vuckic but the deals were rushed through with no medicals being undertaken.

The 21-year-old has denied rumours claiming he is suffering from Hepatitis-C, but Gers boss McCall confirmed his condition means he will not be able to feature for his adopted club.

“Bigi has got a medical condition which is a personal matter,” said McCall speaking to Sky Sports. “The doctor and consultant are all involved in that.

“I knew him at Coventry. I remember watching him and thought when I came into the job he will be a good one to bring in and give us a bit of energy. Unfortunately because of his medical condition he won’t be able to play for us.

“But that is as big a blow to the kid as it is for us. It’s not his fault, this [row] has been nothing to do with him. He comes in with a smile on his face each morning, he trains with the fitness coach as hard as he possibly can.

“So as disappointed as we are that we can’t use him, you have to think of the boy in this matter because he can’t go back, he can’t play for anyone else.

“It’s an unfortunate circumstance that really should never have happened.

“Should these guys ever have been sent here? Well, with Bigi being unable to play that’s a no-brainer. With Shane, he was on his way back but had a little setback.

“But I think if you look at it in all honesty, anybody who comes up for a six-month loan should have a medical – obviously that is not the case.

“If that had occurred, two or three of the loans may not have happened.

“But none of the players are at fault here. Shane has not been up but the rest come in and train as hard as they can. They are doing their utmost to be involved.”

Bigirimana’s last game was for the Newcastle Under 21-s on Deadline Day, just hours before his move to Ibrox was confirmed.