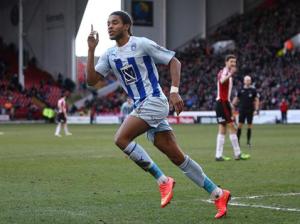 Coventry City will be without the services of on-loan Reading striker Dominic Samuel for the rest of the 2014/2015 Season after the striker suffered a fractured ankle in the loss to Leyton Orient last night.

Samuel was caught under a late challenge by an Orient defender in the ninth minute of last night’s game, suffering the injury.

Samuel will now return to parent club Reading to undergo treatment, ruling him out for the remaining six games of the season.

In his loan spell, Samuel scored six goals in thirteen appearances; becoming the Sky Blues’ leading goalscorer and was the most prolific loan signing since David McGoldrick joined on loan from Nottingham Forest in the 2012/2013 Season.