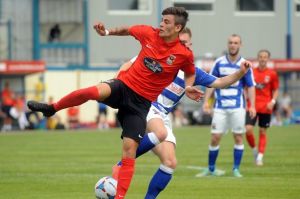 Speaking to the Club’s official website, Lameiras revealed his former Tottenham academy team-mate gave the Club a glowing reference when asked about the Club.

“Grant is one of my closest friends,” the 20-year old Portuguese said.

“He really enjoyed it here and I spoke to him about the club and the set-up. He gave the club a glowing reference and based on his review, I thought I should definitely come down and I’m pleased I had that chat with him.”

Ward himself was linked with a return to The Ricoh Arena this season, but instead stepped up a league to join Rotherham United in The Championship as he continues his development. Now Lameiras could be viewed as his replacement.

“I’ve really enjoyed it and it’s been a great two weeks so far. I’m just looking forward to getting some games and achieving something big for the club this season.

“I’ve got on well with the lads and the manager is always telling me things I can do to improve. He’s been a big help from day one.

“Being on trial, I’ve looked at it as a way to showcase what I can do, without pressure. I knew some of the boys from before and I’ve loved every minute, I think I’ve done well but I can always improve.

“I’m a player that likes to create things, I want to get fans off their seats and I want to turn that into goals and assists this season.”