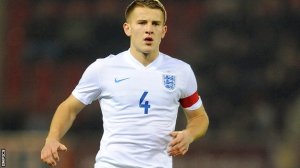 Morris, 19, is no stranger to Sky Blues boss Tony Mowbray as it was Mowbray who gave the England Under 19 captain his Boro debut at the age of 16.

A central midfielder, who can also play at centre back has represented England at Under 16, 17, 18 & 19 levels, captaining each team.

“I’ve had a frustrating time with my injury lately so I’m just glad to get back focussing on the football and I’m delighted to be here,” Morris said.

“It was a stress fracture on my back probably most frustrating injury I’ve had, but that’s behind me and I can’t wait to get started.

“When I was 16, the manager had the faith in me then so I’m glad to be back working with him.

“He gave me my debut for Middlesbrough in the FA Cup and I’m really looking forward to getting started, I can’t wait.

“Playing for England gives you confidence and playing with the best players helps to improve you.

“I was at Burton for a month and while I didn’t play in my favoured position I still enjoyed the experience. I played on the wing but I prefer a central role and like to go box-to-box. Either way, I’ll play where I’m told to, but the way Tony Mowbray spoke to me about it I’m really excited to kick on. I want to try and make my claim here and continue improving.”