Joe Cole to join Tampa Bay Rowdies according to ESPN 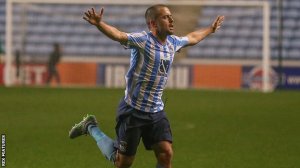 Coventry City midfielder Joe Cole is to depart The Sky Blues, and join Tampa Bay Rowdies according to ESPN.

Former England international, Cole, initially joined City on a one-month loan deal from Premier League side Aston Villa in October, before it was extended to January where the deal was then made permanent on a free transfer until the end of the 2015/2016 season.

The 34 year old has now apparently agreed a one year deal with the North American Soccer League side, with the option of a further year.

Currently on their roster is Freddy Adu, a name tipped for a big future when he was younger, and former Sheffield United defender Neil Collins but they have one international space left.

Coventry City manager Tony Mowbray had previously spoken to The Coventry Telegraph about the difficulty in keeping the 56 cap England international at The Ricoh Arena, stating the only way they’d be able to convince him too would be by winning promotion to The Championship, which with 10 games remaining is becoming more of an unrealistic scenario.

Cole has 16 appearances, scoring one goal for City so far.