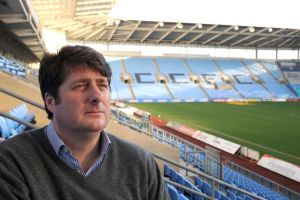 Coventry City Chairman Tim Fisher faced the Sky Sports cameras and was interviewed by Jonathan Oakes before yesterday’s 1-1 draw with Sunderland facing questions regarding the Club’s future. Here we provide a full transcript of Fisher’s responses.

JO: “Yes, The Ricoh Arena is home to Coventry City for the time being, but that may not be the case in the long term, their contract to play here expires at the end of this season. Tim, what’s the latest, how are negotiations going to extend your stay here?”

TF: “Well, we’ve just spoken to our landlords and expressed our desire to stay at The Ricoh. Erm, we’re hoping to engage in discussions and negotiations in the next few weeks.”

JO: “There is a court hearing due in the next few weeks, do you think that will help with the process? What do you hope to achieve from that?”

TF: “Well it’s a court judgment that’s due, but that’s really down to the shareholders and, er, the judge. We’re just focused entirely on running the football club on a day-to-day basis. We’re not interested in the legal side of things.”

JO: “It’s four years now since the club came back from playing home games thirty-four miles away at Northampton, you can’t contemplate something like that happening again, can you?”

TF: “No, look. There will always be a Plan B and a Plan C but we don’t even want to go there. Plan A, has been, and remains, staying at The Ricoh Arena.”

JO: “Do you know when the time frame is, how soon do you think you might get some progress on this?”

TF: “Well, we’ll keep everybody updated. We’re, we’re trying to engage with the landlord and as soon as we can engage in discussions we’ll let people know.”

JO: “The fans have been at loggerheads with the owners, SISU, for a several years now. Do you think that relationship is improving slightly now with some success on the pitch and investment in the team as well?”

TF: “Well SISU don’t get involved on a day-to-day basis, this was the investment that they made. They leave the running of the football club to the CEO and executive team and I support on a non-executive basis. So, this is an operating company run by football people for football fans.”

JO: “And after promotion last season, what are SISU demanding?”

TF: “No, they’re not demanding of anything. They demanding that we run a business which is break-even financially. Obviously we have certain ambitions, the manager has certain ambitions but we just keep level heads, it’s boring but we take one game at a time.”

JO: “Can you put the fan’s minds at rest then that you are confident that Coventry City will be playing here next season and beyond?”

TF: “That’s Plan A and it’s never been anything other than Plan A, erm, so we’re just hoping to do a deal with the landlords.”