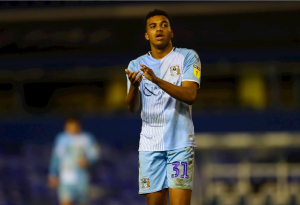 Coventry City manager Mark Robins has revealed that The Club have rejected a seven-figure bid from an unnamed Premier League side for defender Sam McCallum.

St. Andrew’s has been filled with scouts all watching McCallum’s progress this season with Liverpool, Arsenal, Aston Villa, Leeds United and even French side PSG all having been spotted at City’s “home” ground keeping an eye on City’s left back/left wing-back.

Speaking to The Coventry Telegraph after last night’s 0-0 draw at Fleetwood Town, Robins revealed that The Club had knocked back an approach for the 19 year old.

“There’s a bid come come in for Sam McCallum from a Premier League team – a good seven figures but the club have turned it down, thankfully.

“Hopefully we will be able to keep hold of him.

“It’s nowhere near what I would expect for him and we have just got to make sure we are strong.

“I say we should do because the bid is miles away from where we need to be with it and I that if he stays with us for a bit longer that fee only goes up.”

McCallum originally joined The Sky Blues from non-league side Herne Bay in August 2019 after a spell at Jamie Vardy’s V9 academy, and has since gone on to make 34 appearances in all competitions, scoring three times.

Part-time blogger. Full-time entertainer. Can be found on RNTomlinson.com & ccfctv.co.uk.
View all posts by RNTomlinson »
« Matty Godden named in FIFA 20 Ultimate Team ‘Team of the Week’
McCallum joins Norwich; loaned back to Coventry »