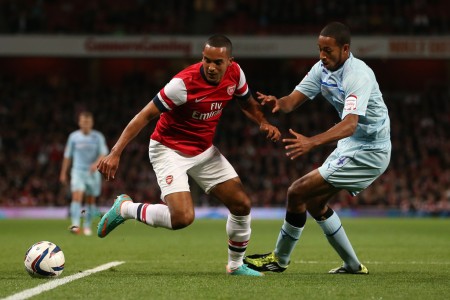 Coventry City traveled to Arsenal in the Third Round of the Capital One Cup last season, losing 6-1 in their first visit to The Emirates.

The draw, which will take place at 9.30am, will be both seeded, based on last season’s league tables, and also regionalised, consisting of 70 Football League clubs.

The two highest-placed relegated clubs from the Premier League will be seeded though to Round 2  – Reading, and Round 3 – Wigan Athletic.

All Round One ties will be played during the week commencing 5th August.

Last season City made it to the Third Round of the competition after a Kevin Kilbane penalty saw City pick up a 1-0 victory away at Dagenham & Redbridge in the first game of the 2012/2013 season, before a thrilling 3-2 (after extra time) victory at The Ricoh Arena over local rivals Birmingham City saw them drawn away to Premier League opposition, in the form of Arsenal where Olivier Giroud’s first goal for The Gunners, a Theo Walcott double and strikes from Andreiy Arshavin, Alex Oxlade-Chamberlain and Miguel Ignasi bought an end to City’s Capital One Cup adventure.