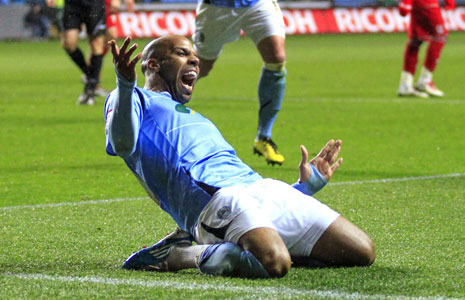 Former Coventry City striker Marlon King has been told he can leave by cash-strapped Championship side, Birmingham City.

Since arriving at St. Andrews, King, 33, has scored 32 goals for The Blues, and still has a year to run on his contract.

But off the field troubles with owner Carson Yeung, has led to the club needing to trim the wage bill, and King has been told he is free to find a new club alongside Peter Lovenkrands, Darren Ambrose and Hayden Mullins.

The Jamaican international has finished both of his seasons at St. Andrews as the club’s top goalscorer, despite not playing since February this year due to injury.

King, netted 13 goals in 29 appearances for Coventry City in his one season at The Ricoh Arena.