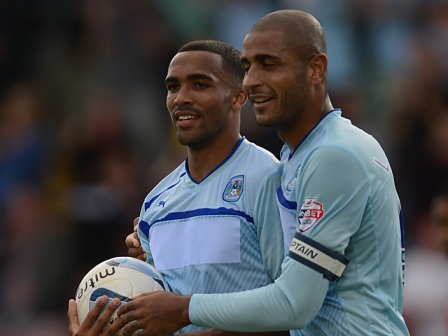 Coventry City Football Club have this afternoon confirmed to The Coventry Telegraph that fellow League One side Sheffield United have made an enquiry about Callum Wilson’s availability.

In five appearances this season, Wilson has scored five goals, despite only netting one goal in his previous fourteen appearances for the Sky Blues.

City boss Steven Pressley however has dismissed the availability of the young striker. “It doesn’t surprise me that there has been interest because young strikers of his type are not easy to come by.”

“I have spoken to Callum of late and he’s very happy at this club and it’s important for him to realise that he’s only at the start of his journey.

“For me, a lot young players move too quickly but we’ve no intention of selling him and the player is very, very happy at this football club and certainly sending those signals out to me.

“He’s at a stage of his career where he needs to play consistently and he needs to get a run of games, and he knows he’s a pivotal part of the squad here.

“We’ve got a very good relationship with him and we want him to remain at this club. And he will.”

It remains to be seen if the Blades will pursue their interest with a formal offer but Pressley insists it would take a “ridiculous” offer before the club would consider selling any of their players.