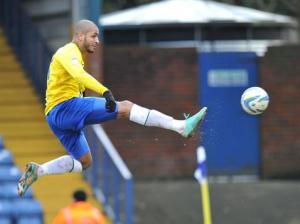 Coventry City manager Steven Pressley has this morning quashed a potential return to the club for Wolves striker Leon Clarke.

Speaking to The Coventry Telegraph confirmed he wants to bring in two strikers with one being “another Leon Clarke” but confirming Leon had “burnt his bridges” with the club.

It has been reported this week, that Wolves manager Kenny Jackett is willing to loan Clarke out next season after only 1 goal in 13 appearances since rejoining the club from The Sky Blues in January.

Prior to his move back to Molineux, the club at which he started his career, Clarke had scored 18 goals in 29 games – the most prolific spell of his career which has taken in 14 clubs and 10 different loan spells.

Originally joining The Sky Blues on loan from Charlton on Boxing Day 2012, Clarke was bought in by then manager Mark Robins as David McGoldrick’s replacement, and the move was made permanent once the transfer window re-opened on New Year’s Day 2013.

In the 2013 calendar year, Clarke scored 27 goals in only 41 appearances, a total of 24% of City’s total goals for the year, but he also built up a lethal partnership with strike partner Callum Wilson.

Crawley Town have also linked with taking Clarke on a season-long loan, something which they have also dismissed with manager John Gregory saying, “I have had no conversations with Leon or anyone else from Wolves. I wish it was true but they paid £750,000 for him and he is earning around £10,000 per week so I don’t think it will happen!”

Speaking to The Coventry Telegraph, Steven Pressley said; “No, I won’t be trying to sign Leon if he becomes available. I know I’ve said that I’m looking for a Leon Clarke type of striker and he undeniably fits the bill, but that moment has gone.

“I rate Leon exceptionally highly and I’ve got great respect for him. Although he’s a player that a lot of managers have had problems with, I like to think that I had a good relationship with him.

“But when we allowed him to go to Wolves the decision wasn’t made purely on football considerations; there were one or two other factors that came into it and I felt it was the right time for both parties to move on.

“It was a shame because I think our club and our team very much suited Leon as a player but my job is to move the club forward in the direction I see fit and will hopefully bring success.”

The full interview with Steven Pressley can be read by clicking this link.