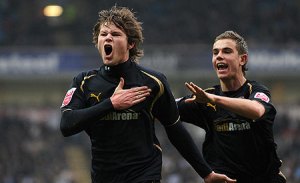 Aron Gunnarsson celebrates after scoring a volley in the FA Cup away to Blackburn Rovers.

Former Coventry City midfielder Aron Gunnarsson will captain Iceland against England next Monday evening in the last 16 of Euro 2016.

Iceland and England will now meet in Nice at 8pm next Monday evening for a place in the quarter-finals.

Gunnarsson, who left The Sky Blues for Cardiff in 2011 has captained his country since 2012 and will now hope to continue Iceland’s dream run in the tournament at the expense of England.