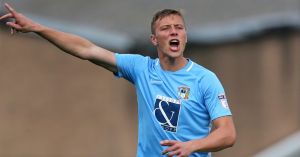 In the 21st minute of the game against Notts County on Saturday night, TV cameras picked up Davies standing on Notts County defender Richard Duffy’s ankle – an incident missed by referee Gavin Ward.

Following the match, former Sky Blues’ loanee Duffy admitted that Davies had apologised for the incident and stated that it was unintentional but a three man FA panel have unanimously decided that it was a red card offence and handed Davies a three-match suspension for violent conduct.

Davies will now miss the second leg at Meadow Lane on Friday night and two subsequent EFL fixtures, including the Play-Off Final at Wembley should City win at Meadow Lane.